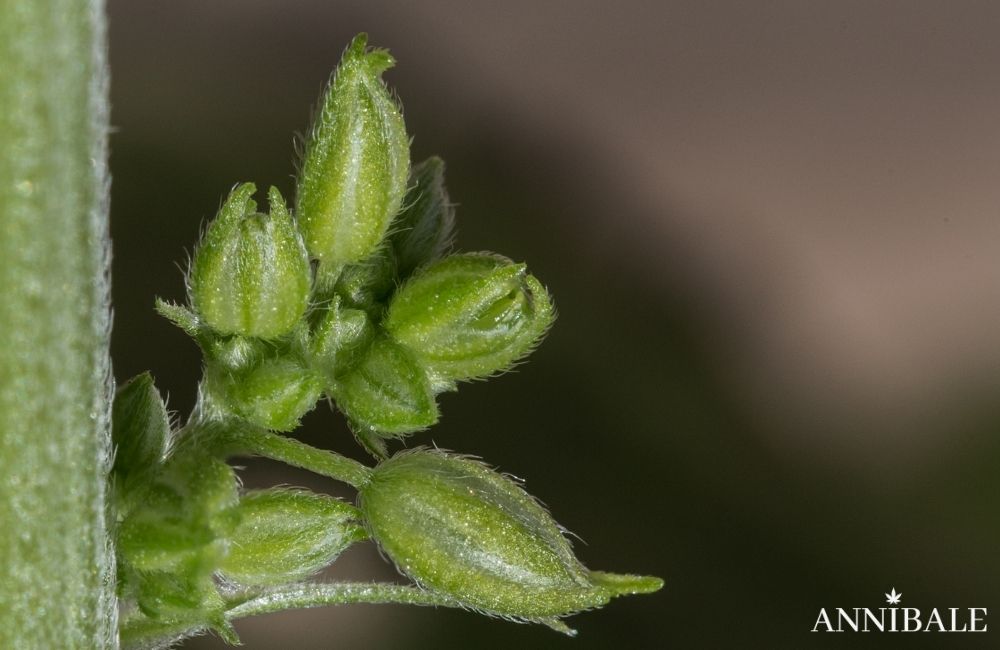 How to recognize Male and Female Marijuana plant?

Welcome everyone to the new article in our “Cannabis Growing Manual” on the differences between Male VS Female Cannabis plant, and how to recognize them quickly to avoid unwanted pollinations that can have dire consequences for your amazing weed crop! 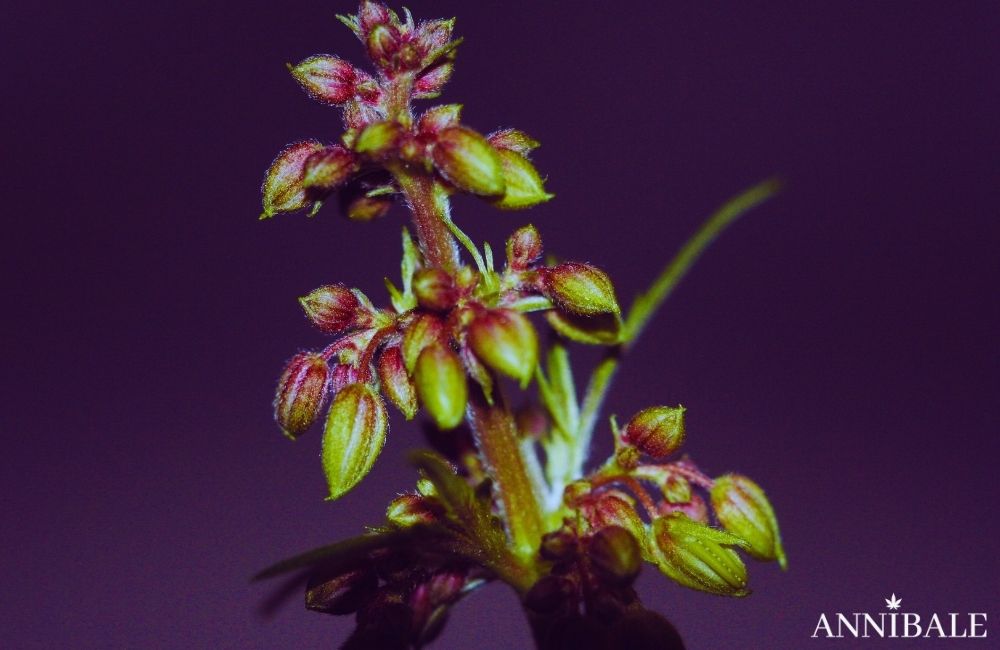 Why today’s cannabis growers prefer to buy feminized seeds (or feminized autoflowers) and not regular seeds, despite being the regular seeds capable of donating the authentic genetic lineage of the marijuana strain. and therefore of superior quality?

The main difference between a female and male cannabis plant lies in the content of its active ingredients: the male marijuana plant produces THC (and CBD, CBG and others) in low quantities, compared to the abundant productions of trichomes full of terpenes and THC. developed from female Marijuana plants!

For this reason, trying to smoke the male cannabis flowers will not give any psychoactive effect: it is therefore a valid substitute for tobacco. For example, in most Dutch coffeeshops it is possible to replace the use of tobacco (to be mixed with weed) with the use of Male Hemp. While replacing tobacco with male marijuana is a must for cannabis smokers who do not want to smoke pure marijuana in Amsterdam coffeeshops, it is non-existent by consumers, who continue to prefer tobacco in their joints. 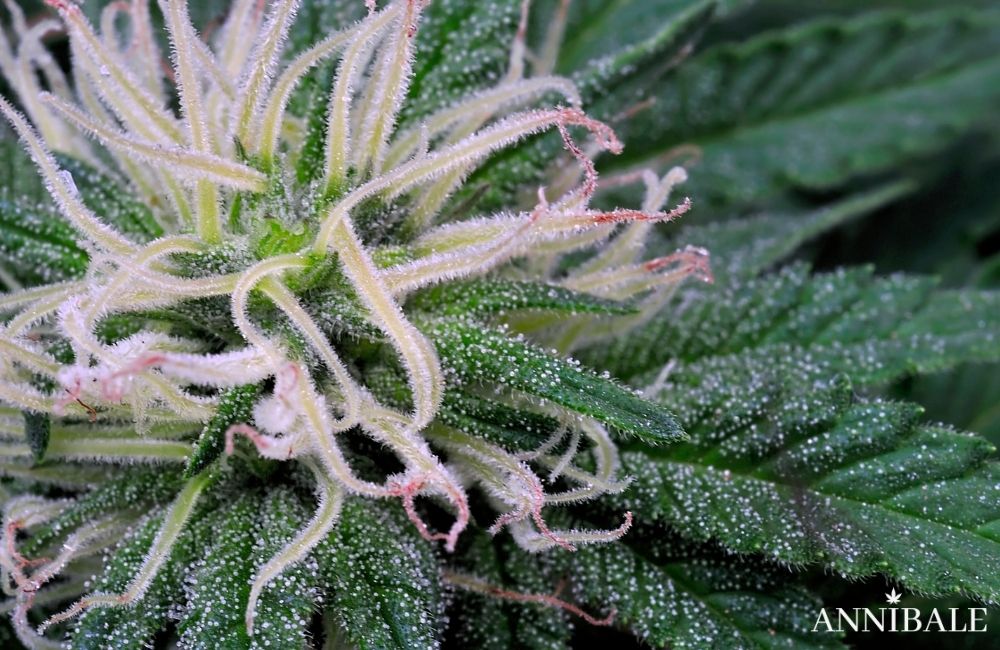 If during the vegetative phase the Cannabis plants still cannot express their true nature, during the first two weeks after the change of lights in Indoor cultivations (or towards the beginning of August in European Outdoor cultivations) the Marijuana plants develop the “Pre-flowers“, or the primordial flowers.

These first flowers will show us which sex our Hemp plants grown from regular seeds belong to, helping us to select male Marijuana plants (which will be isolated from females if you do not want to risk pollination!).

If the pre-flowers have not yet sprouted on your plants, don’t rush: with the right environmental conditions (correct hours of light, temperature and humidity), your plant will develop its sex too! 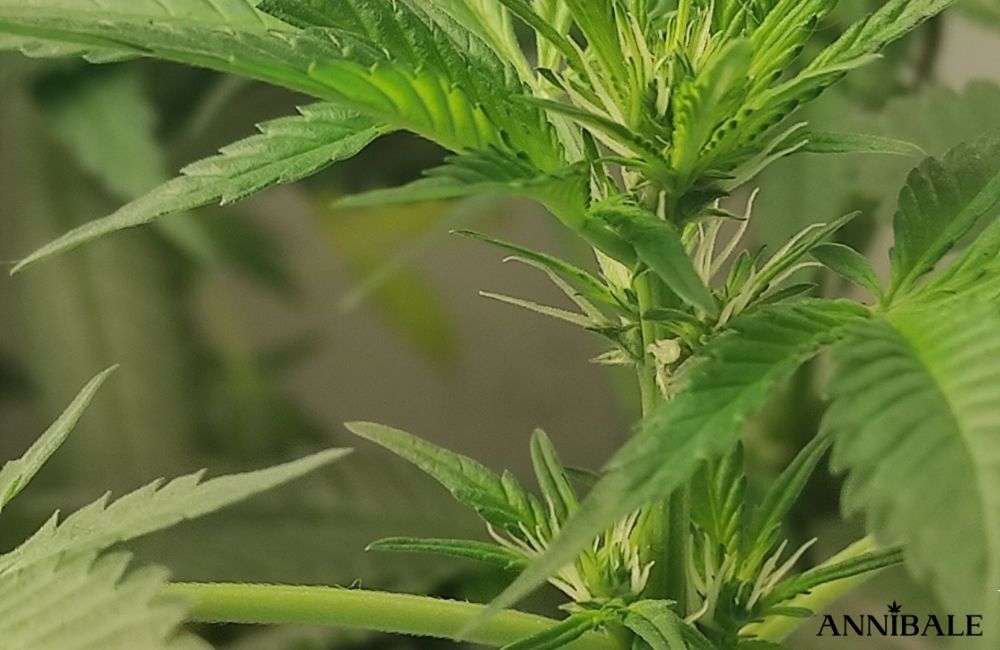 Hermaphroditism can also exist in the world of cannabis plants! This is due to the repeated reproduction of phenotypes containing abundant portions of identical DNA, as it can be for Cannabis hybrids stabilized too many times with plants from the same family unit (siblings or parents).

Marijuana hermaphroditism is never a positive thing: whether you grow to harvest flowers or to produce seeds, these unpredictable phenotypes can later develop their hermaphroditic problems, confusing growers and pollinating every female plant around. 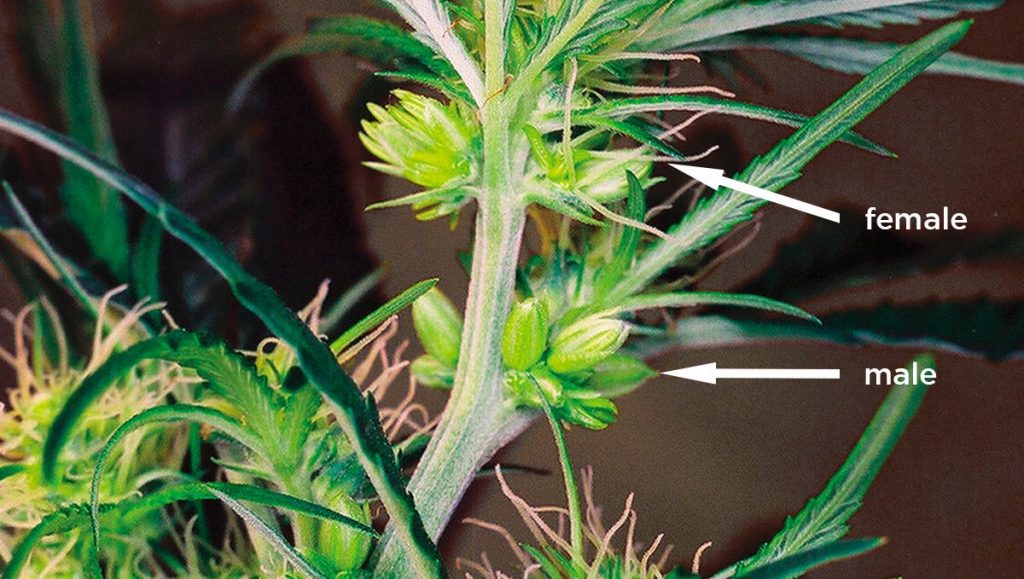 During the first two weeks of flowering, before the development of the pre-flowers, the Cannabis plants undergo a strong growth in height, due to the preparation of the various buds on which to subsequently build thousands of pistils, which once compacted with their own resin will take on the classic shape of Marijuana flowers.

Male pre-flowers are characterized by pollen sacs, which once opened will only need the wind (or bees) to distribute its pollen around entire kilometers from cultivation. For this reason it will be essential to separate the male cannabis plants from the female ones, in order to avoid the possible threat of unwanted pollination!

The female pre-flowers are very characteristic, and it will hardly be wrong to recognize its two white hairs (Stigmas). 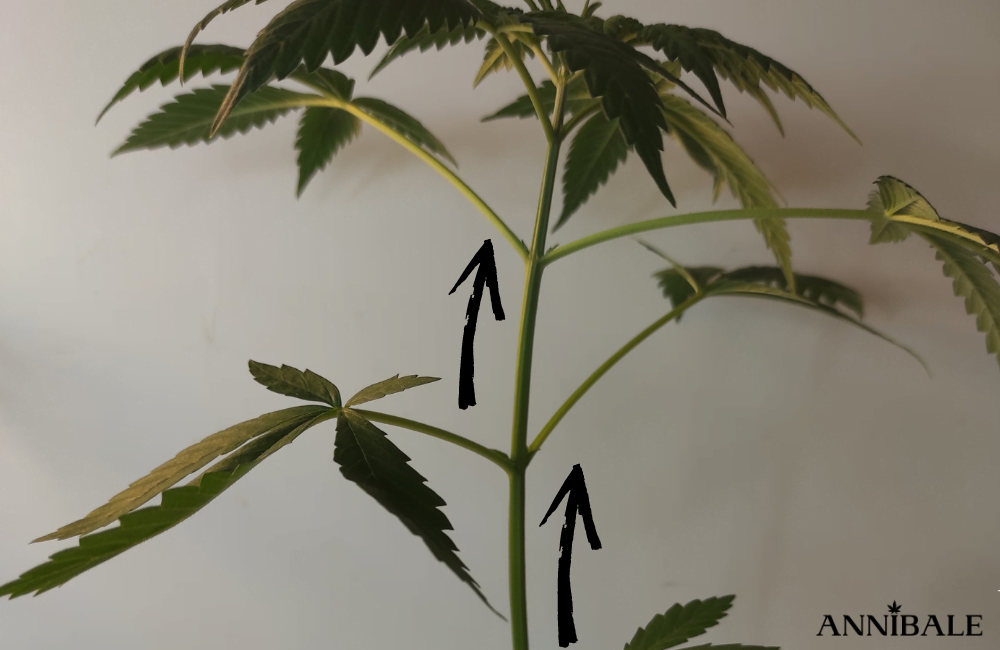 The female Cannabis plant develops its first flowers more slowly than the male, while remaining slightly shorter. From the first weeks of flowering, female plants produce more odor than their siblings, although a lot depends on the genetic quality you are growing (read more about stretching cannabis plants in our article on Marijuana Flowering phase, week by week).

The female Weed plant can be recognized by the classic shape of its pistil, which being in the internodes (part of the plant where the stem of the leaf meets the stem) will be very small, with an elongated shape and with two white hairs called “Stigma”: if you spot this detail, your cannabis plants are sure to be female! 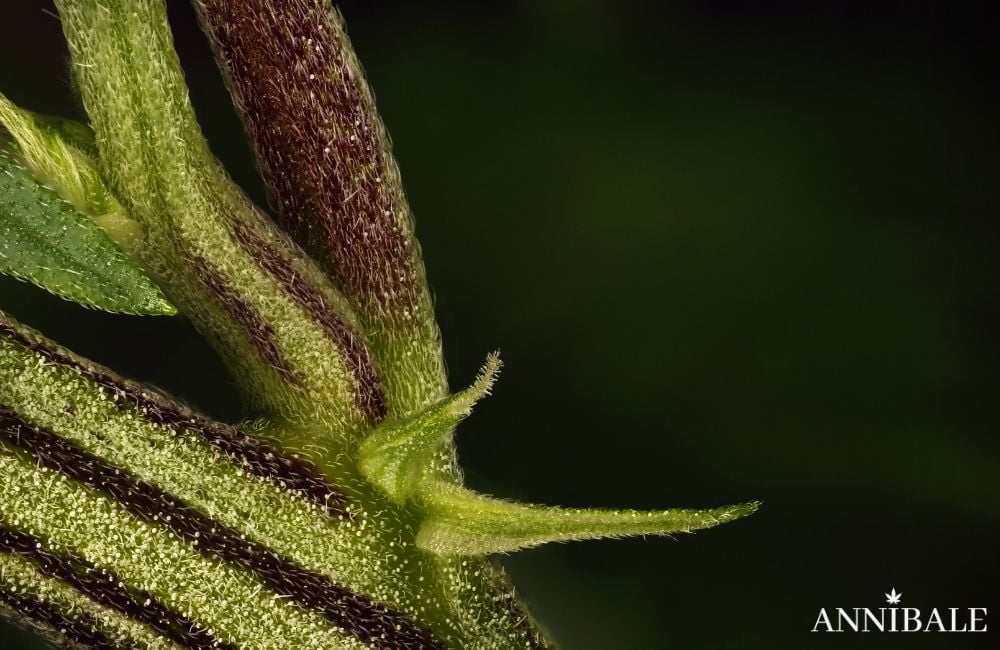 Male Marijuana plants are the easiest to recognize, as they develop their pre-flowers earlier than females, and are easier to see with the naked eye. Male cannabis flowers are formed from pollen sacs, natural containers capable of developing and producing millions of potential cannabis seeds! Separate Male hemp plants before the full develop of pollen sacs, in order to avoid the pollination. 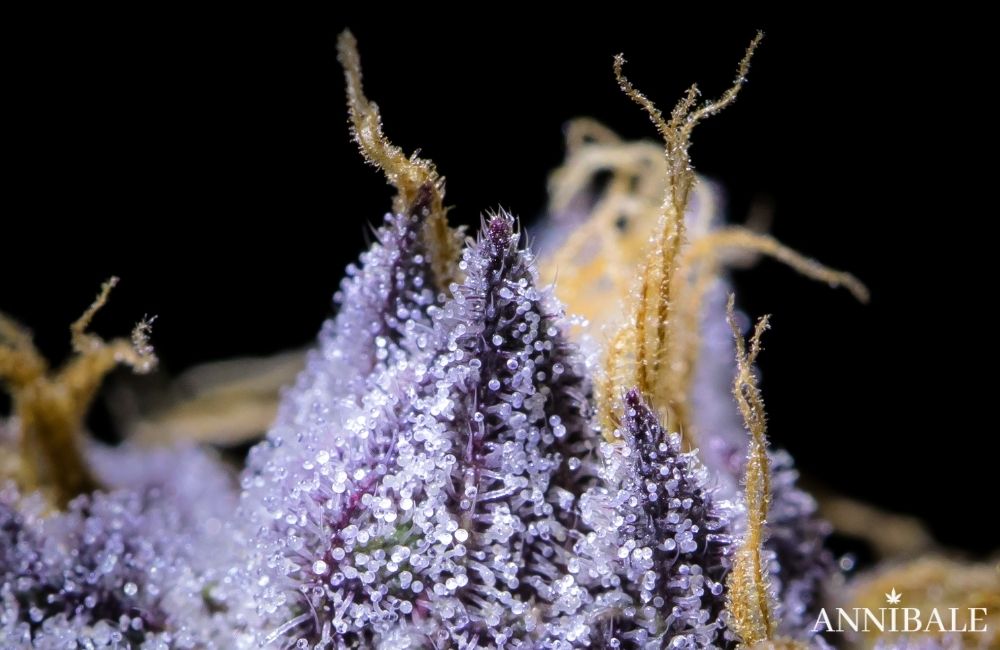 Keep following us, a special greetings from the Annibale Seedshop Team!